Hello dev-friends! Let’s continue the topics discussed in part I.

Today we will look closer at different CSS writing methodologies, such as BEM, rscss, SMACSS. It should be also mentioned, that the methodologies can be combined (eg OOCSS + BEM). Of course only if it makes a sense to us. That’s actually important thing. It’s not so good to use sucking things only because they are so “cool” now, so trendy and so on. It doesn’t matter — in next days, weeks or months there something “completely new and awesome” will appear 😉 But this is a separate topic, on which I don’t want to waste the time 😉 OK, to the point. 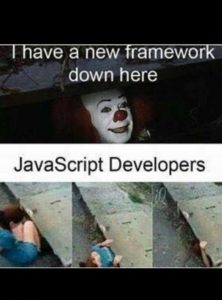 Let’s start with SMACSS. And I have to say I never used this approach of organizing and writing CSS in real-life project. It’s not about SMACSS sucks or something like that. Simply this methodology is not comfortable for me. For sure it has many advantages, just for me some details are annoying. BUT, of course, it may be very good and comfortable for the others. It’s up to you! So…

SMACSS (Scalable and Modular Architecture for CSS), created by Jonathan Snook, is a style guide for CSS code. In this approach we organize the CSS code by categories (Base, Layout, Module, State, Theme). Let’s look at them closer.

Layout styles define the appearance and placement of typical web and page elements, such as header, footer, sidebars. In SMACSS (and not only) it is assumed to use the prefix “l-” for them.

Modules in SMACSS are independent, reusable code blocks (UI), such as menu, search box, list items, etc. We can say that they are something like blocks in BEM. Modules are usually located in containers, inside layout elements.

The assumption is that each module should be independent of the other modules. It should work the same way in every container we put him in. Therefore, do not create styles that are dependent on the parent container.

As an example we can consider the menu module:

They simply define the appearance of the element’s state, depending on the situation (e.g. hidden, expanded, etc). We collapse or expand menu, make elements visible or hidden, move cursor over an element, and other such situations.

It is recommended to define such logical states with the “is-” prefix, e.g. “is-active”.

Themes are usually found in larger projects, where variants exist (for example: daily, nightly, sexy, sunny, etc), which define different look (and feel) for Module and Layout elements of the project.

This author created his own guide style based on SMACSS and OOCSS:

And the author of SMACSS runs the website (https://smacss.com), where we can buy or read on-line a book about this CSS methodology:

Let’s get to know other methodologies 😎 It is also not a surprise that we will find the similarities between them.

RSCSS presents a different approach, principally quite simple (it’s smaller comparing to the others). We can start using it quickly; it may be good to start with, if you are not using any methodology yet.

RSCSS — Reasonable System for CSS Stylesheet Structure is a CSS style guide with simple set of assumptions. In rscss every “building block” is a component. In addition to components, we also distinguish between elements, variants and helpers.

Component — a single “piece” of UI code, easily reusable in many places of the app; contains elements.

Element — HTML tags inside of the components.

Variants — variations of default appearance (look and feel) of an element.

When I was developing a small front-end using Bootstrap, rscss and Slim templates (http://slim-lang.com), I didn’t like the “_” prefix recommended for helpers. Code like this was weird:

Presently, and no matter what methodology using, my helpers always have the “h-” prefix, e.g.:

Finally, it’s time for BEM! It’s my favorite approach, that I use in my projects.

BEM (Block Element Modifier) is a methodology elaborated by Yandex developers. This is a fairly simple approach to creating modular, reusable CSS code.

BEM frees us from cascading. We apply only the styles, that we really need. Also, the main blocks do not depend on other elements. In that way it’s much easier not only to maintain and modify the code, but also to move (blocks) to other places, and even to another project.

In the assumptions BEM is to be:

Note: it’s good to know, that BEM was created for projects, that have to be released quickly, BUT maintained in a long (long-term) perspective. And it works great in that matter.

In BEM we see our code as:

– blocks — for example a simple, stylized button, menu or extended form — we think of the block as a re-usable component in our project (examples: header, container, menu, checkbox, input)

– modifiers — these are just additional classes, that modify the appearance of a block or element depending on the state, e.g. an active menu item after hovering over the cursor (examples: disabled, highlighted, checked, fixed, size big, color yellow)

The BEM methodology gives a simple and understandable structure. We create styles based on the conventions of names.

.block — the first word in the name means that the class applies to the given block

__element — two underlines mean that the given class concerns the element

It’s all about the basic naming convention. Our task is simply to think about how to organize styles to reflect the requirements of our project, elegantly and comfortably.

We can also say that BEM encourages us to think twice before we complicate things unnecessarily. Examples below.

Element is a part of block, which does some defined role in his context, e.g.:
– a head (of the person)
– menu item
– a label, button or input field

In this way, we know that the head or hand refers to the context of the person. After decapitation, we could have separate classes, e.g.:

Only remember, that the head can belong to a person, but also for the dog, cat, monkey, etc. And in each case it will look different 🙂

In a hurry, we can quickly start writing bizarre or unnecessarily complicated styles. For BEM, there are a bunch of rules defined by programmers using it to avoid traps.

A. Use unique names for blocks (CSS classes).

B. Do NOT use ID selectors, neither HTML tag / cascade-base (childs) selectors (for everything we can define CSS class).

Take a look, it’s simply better to use selectors like

C. Prefixed namespace. Can we also use some prefixes? Certainly!

For the selectors to work with JavaScript (to refer in JS code) we can add the ‘js-‘ prefix: 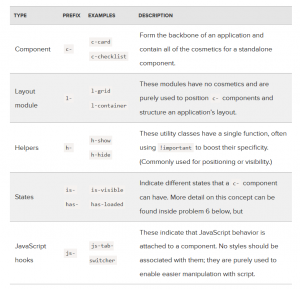 D. Don’t chain BEM elements — so if our class looks like this:

there IS something WRONG. It’s better to link “grandchildren” directly to the block, or create a separate block for them.

E. Note on nesting. It’s about a sensible nesting of styles, above all — NOT too deep.

It’s better if double underlining appears in the selector’s name once. So we write:

E.g. if we have a form ‘search-form’, and in it a div ‘search-form__content’, which contains inputs, the CSS classes for the inputs we can write in two ways:

Both versions are correct — recommended by the BEM documentation.

Take a look on further samples.

Now let’s see the same code with the corrected selectors.

Why? Let’s build our components in a smart way. BEM (or another convention) is to help us, not limit us, or complicate simple things!

Tip: for multi-member name parts of the selector (blocks, elements or modifiers), we simply use a hyphen, e.g.:

The naming scheme is recommended, though not the only one: https://en.bem.info/methodology/naming-convention/#alternative-naming-schemes (BEM is being developed for a longer time ;-))

More about good practices and pitfalls:

A word about mixes

We do not always need to create block-related selectors. This is highly recommended if we think that our block will be re-usable.

But assuming that e.g. we mix styles of the menu item with the button, and the ‘button’ and ‘active’ classes of all our buttons will be defined by the same CSS code (and that’s enough for us in the case), then we can create separate classes, so we write:

However, it is more likely that the elements of our project will be too different from each other, and then, of course, we stick to the recommended BEM convention.

Bootstrap Framework does not use BEM conventions, so we may be afraid of nasty code when we mix up Bootstrap styles and ours — BEM-based. I think it’s not a problem!

We use Bootstrap’s classes completely normal, and also we apply our own, BEM-based classes. With the naked eye we can see which are from Bootstrap, and which are ours. There should not be any problems. The one good rule I use in such cases, is putting Bootstrap’s classes as first on the list, and ours afterwards, e.g.:

We have learned the popular CSS methodologies, but certainly not the only ones. There are many others, some not maintained anymore, the others may appear soon.

Despite of OOCSS or BEM, we can find methodologies such as:

But it still can be differently.

I think I used scoped CSS for the first time in practice when started using (awesome) framework: Vue.js, where scoped CSS can be used to stylize components.

The necessary will be applied to the current component, not to the entire document. Simple and pleasant. When writing CSS using BEM or other methodologies, we also define scopes in a way that is appropriate for a given convention.

Can we keep using BEM in scoped styles? Why not!

They gain popularity. They can be a good solution for someone who works with other technologies and/or doesn’t want to adapt all this Sass, BEM, and other stuff.

CSS modules are available, for example, in the css-loader for Webpack (webpack rocks BTW ;-)). Styles (as modules) can be elegantly loaded into the project from the convention of ES6 modules, e.g.:

The styles from the module are available in the following way:

Cascading style sheets are problematic because they are … cascading. Sooner or later, as the project is developed, we can feel that. CSS methodologies allow organizing styles in a better, consistent way, solving typical CSS problems.

Across many potential solutions, everyone can find something suitable for own needs. CSS writing approaches just should focus on a consistent file and folder structure, as well as keeping naming conventions. In addition, CSS should be developed in a modular way, so that we can maintain, import and use necessary modules easier.

Same about JS and AMD. In the “fresh edition” we use an awesome approach, offered as ES6 modules. It’s not directly supported in the browsers yet, but NO problem — we use Babel (transpiler) and module bundler such as webpack and ready!

So let’s go! Towards the future 🙂